FOR IMMEDIATE RELEASE No. 3094

TOKYO, April 5, 2017 - Mitsubishi Electric Corporation (TOKYO: 6503) announced today that it has developed eight new X-Series HVIGBT modules in three (3.3kV, 4.5kV and 6.5kV) classes for larger capacity and smaller sized inverters in traction motors, DC-power transmitters, large industrial machinery and other high-voltage, large-current equipment. The models will be released sequentially beginning in September. Prior to the releases, the models will be exhibited at several major trade shows worldwide, including MOTORTECH JAPAN 2017 during in Chiba, Japan from April 19 to 21, Power Conversion and Intelligent Motion (PCIM) Europe 2017 in Nuremberg, Germany from May 16 to 18, and PCIM Asia 2017 in Shanghai, China from June 27 to 29. 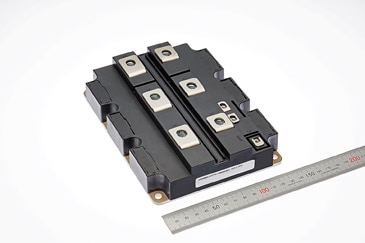 1)
Wide range of new high-voltage IGBTs includes leading power-capacity ratings, contributing to the large capacity of inverters
-Three 3.3kV modules (one 1200A and two 1800A models), three 4.5kV modules (900A, 1350A and 1500A models) and two 6.5kV modules (600A and 900A models)
-Two modules offering industry-leading power capacity ratings ─ 1800A in the 3.3kV module and 1500A in the 4.5kV module ─ join another leader, the existing 6.5kV module (1000A rating)
2)
Seventh-generation IGBT and RFC diode for smaller inverters
-Seventh-generation CSTBT*™ chip and RFC diode chip reduce power loss by about 20%**
-The new chip set's reduced package size, about 33% smaller than its predecessor (same voltage and current ratings), will lead to smaller inverters
-150-degree Celsius operating temperature enables a simplified cooling system which realizes smaller inverters and improves the degree of freedom in design